Up your Git game and clean up your history

This post is aimed for people who want to learn how to use commands such as rebase & learn a few tricks to have a nicer Git experience.


Alright, let’s start by watching the Git history of some of my first ever projects on Github:

Oh no no no no

OH LORD WHAT HAVE I DONE

Now that I’ve ridiculed myself, let’s check out what most of my projects look like now 😄


If you don’t know what this all means, let me explain briefly:

This is a representation of your Git history on Github, meaning the commits you’ve done over time on your project’s branches.

You can see your own by navigating to the “Insights” tab of one of your projects, then going to the “Network” tab on the left.

The black bar represents my master branch and each alternating blue & green bars are separate branches.
As you can see on the more recent and nicer history, they alternately get merged into master, creating this nice flow of writing code & merging it (which is always recommended, instead of accumulating pull requests).

So, how can you have a cleaner history? Let’s go over real use-cases.

Here’s what we’re covering today (make sure to do each section in order):

The magic of git rebase

Git rebase lets your remodel your history to your will. See it as a way to manipulate your list of commits on a given branch.
For example, you could drop commits completely (basically say goodbye to them in the abyss of git), rename them (rewriting your commit message), squash them into other commits (which is useful to hide commits that do small things such as adding a semicolon, you don’t really want to see them in your history) and many more things.

Go to the following project I made for the occasion, fork it and let’s get started.

Forking is basically creating a copy of my project for yourself, you’ll be able to mess around with it without any problems ! To do it, click on the fork button on the top right:

Then, clone the repository you forked.

Example 1: fixing up a commit with rebase

Scenario: you have committed something that does not deserve a commit of its own, or you want to reduce the number of commits on your branch to one before making a pull request.

We now want to fixup the update commit into the add commit, because this small change does not deserve a commit of its own.

To do so, we’ll use the interactive mode of git rebase, which lets us apply the rebasing with a nice interface.

HEAD~2 means start from the last commit on the branch (the head) and go back 2 commits. If we wanted to manipulate more commits, we could change the value to the far right.
You should now have an interface that looks something like this: 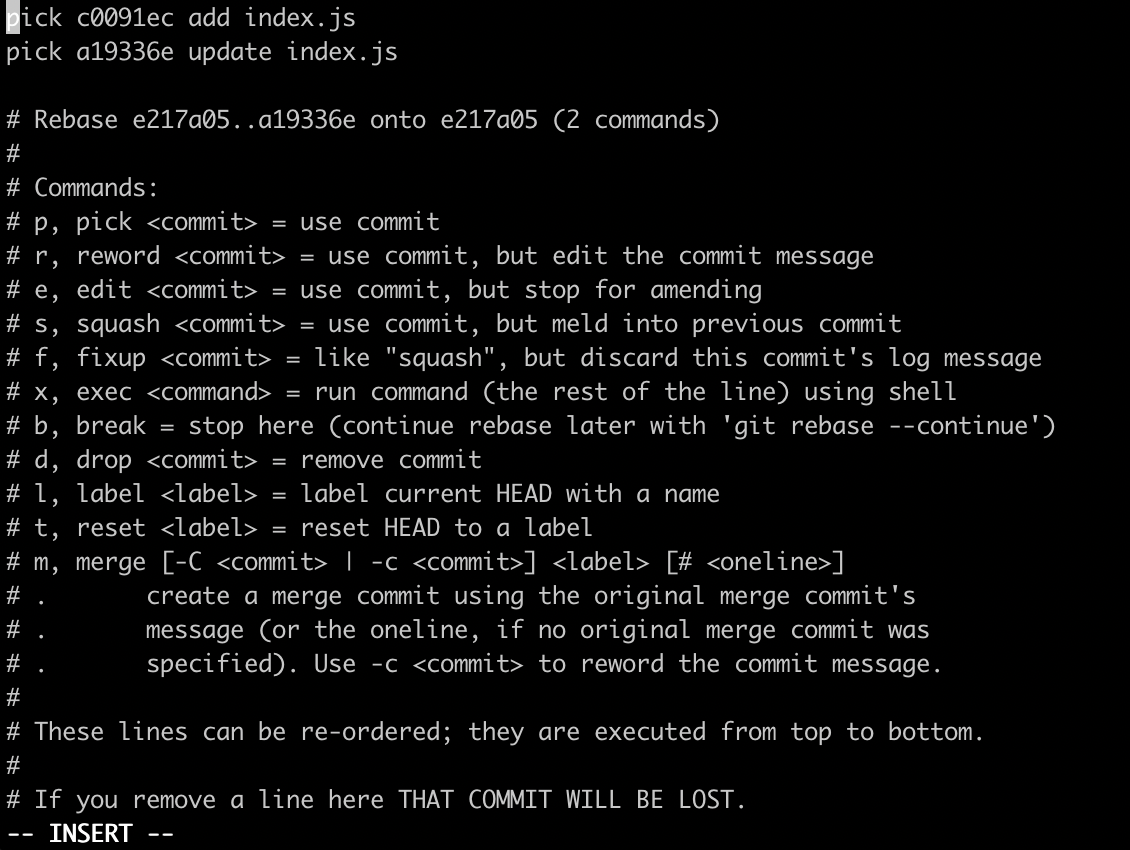 Don’t panic, this only shows you the two commits you are changing at the top, and the available commands bellow them.
By default, the rebase interface uses Vim, to write in it, simply press the i key. You are now in “INSERT” mode. As we want to fixup the second commit in the first one, all we have to do is write fixup or f instead of pick in front of it. Our update index.js commit will now be squashed into the add index.js but only the add index.js’s message will be kept.

Now, we want to apply the rebase, press escape to leave the INSERT mode, press : (colon) and enter wq for “write” and “quit” and press ENTER to apply these changes. The colon simply allows you to write commands for Vim to execute.

The following message should now appear in your console:

Check your git log, you now have one beautiful and clean commit !

The -f is essential as a rebase modifies your git history and requires to be forced.

Scenario: you want to completely remove a commit

We’ll drop the add FILENAME commit we previously made:

Pretty similar, with one change.

Scenario: you want to fix a typo or rewrite a commit’s title or description 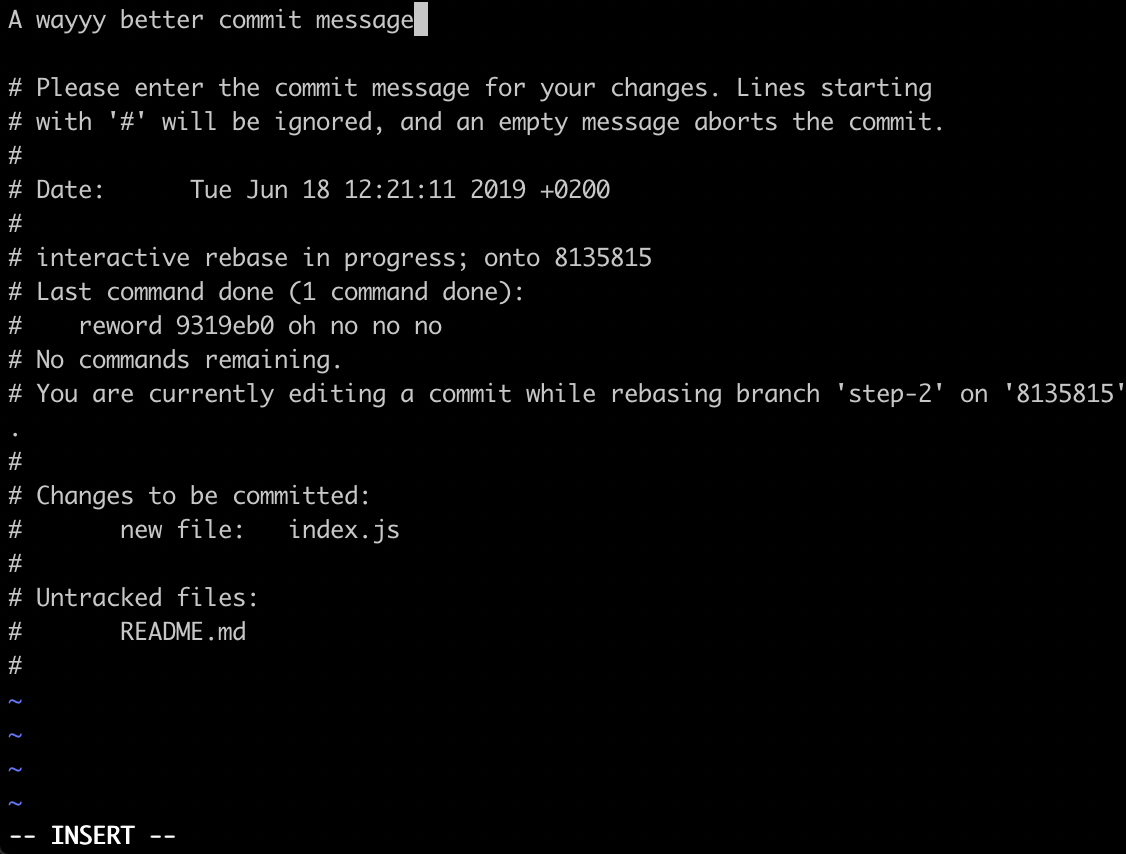 This example isn’t reproduced in the Github project, but feel free to test it out.

Scenario: you have multiple PRs (Pull Requests) open at the same time

You merge one PR, now, your second PR is not up to date with master, oh no !

This very frequent scenario will have us rebase our second PR on master so that it gets the new code merged from the first PR.

This downloads all the references our branch needs to apply the rebase. 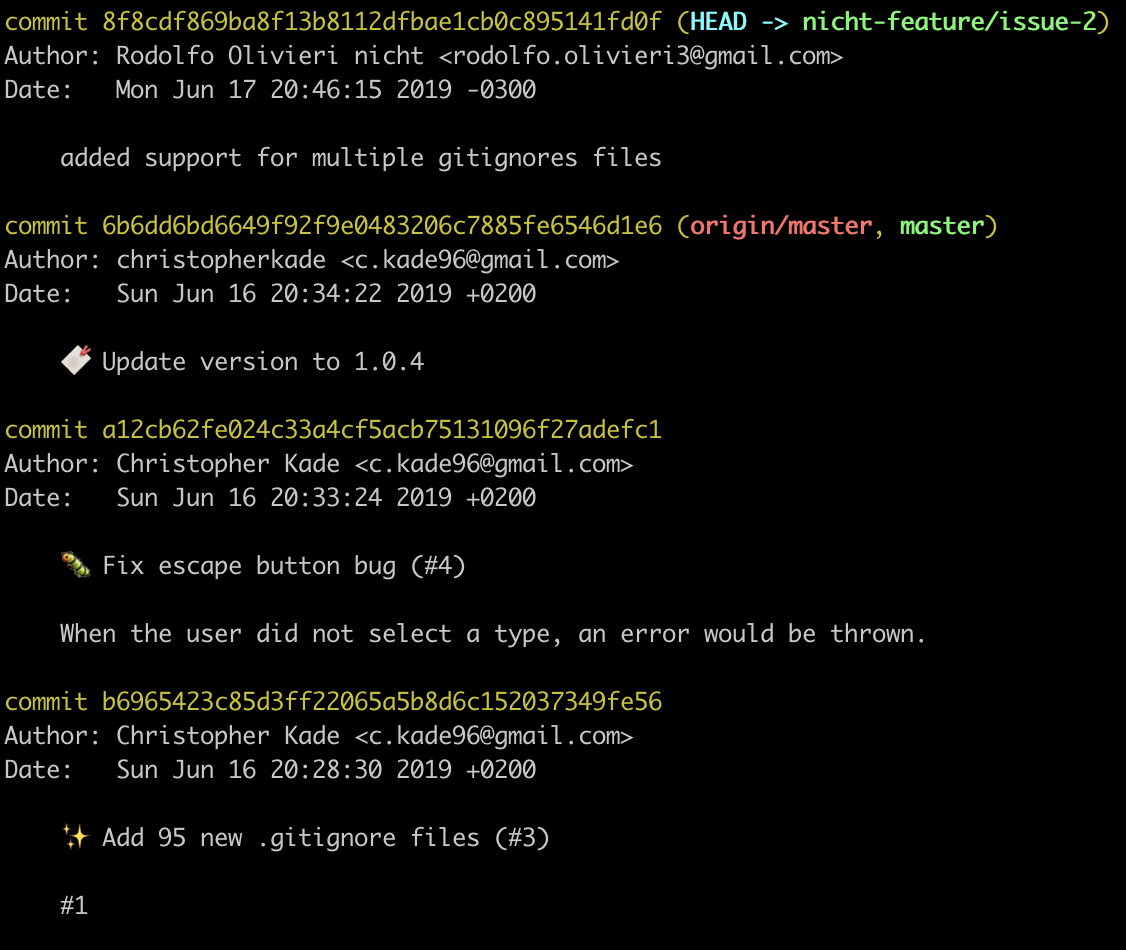 Would you rather have a git log that is straight to the point and looks nicer?

Look no further ! Here’s how you can achieve it, in your console, paste the following:

You’ve now created an alias to git log called git lg that will display the nicer output showed before. Try it out by typing git lg (or git lg -p to see the lines that have changed).

Thanks to Coderwall for this bonus ✨

Learning how to use Git is probably one of the most important skills we can acquire as developers. I hope some of you won’t be as afraid of rebase as I was a while ago.