Last week I attended a Tech Lunch at Algolia's Paris offices on the subject of designing for developers. I had a really fun time discovering their offices, sharing some food with my colleagues, listening to talented designers and of course, networking ! I'll share some pictures of my time there and of course briefly cover what was said during the discussion.

Note that the full panel can be found here. 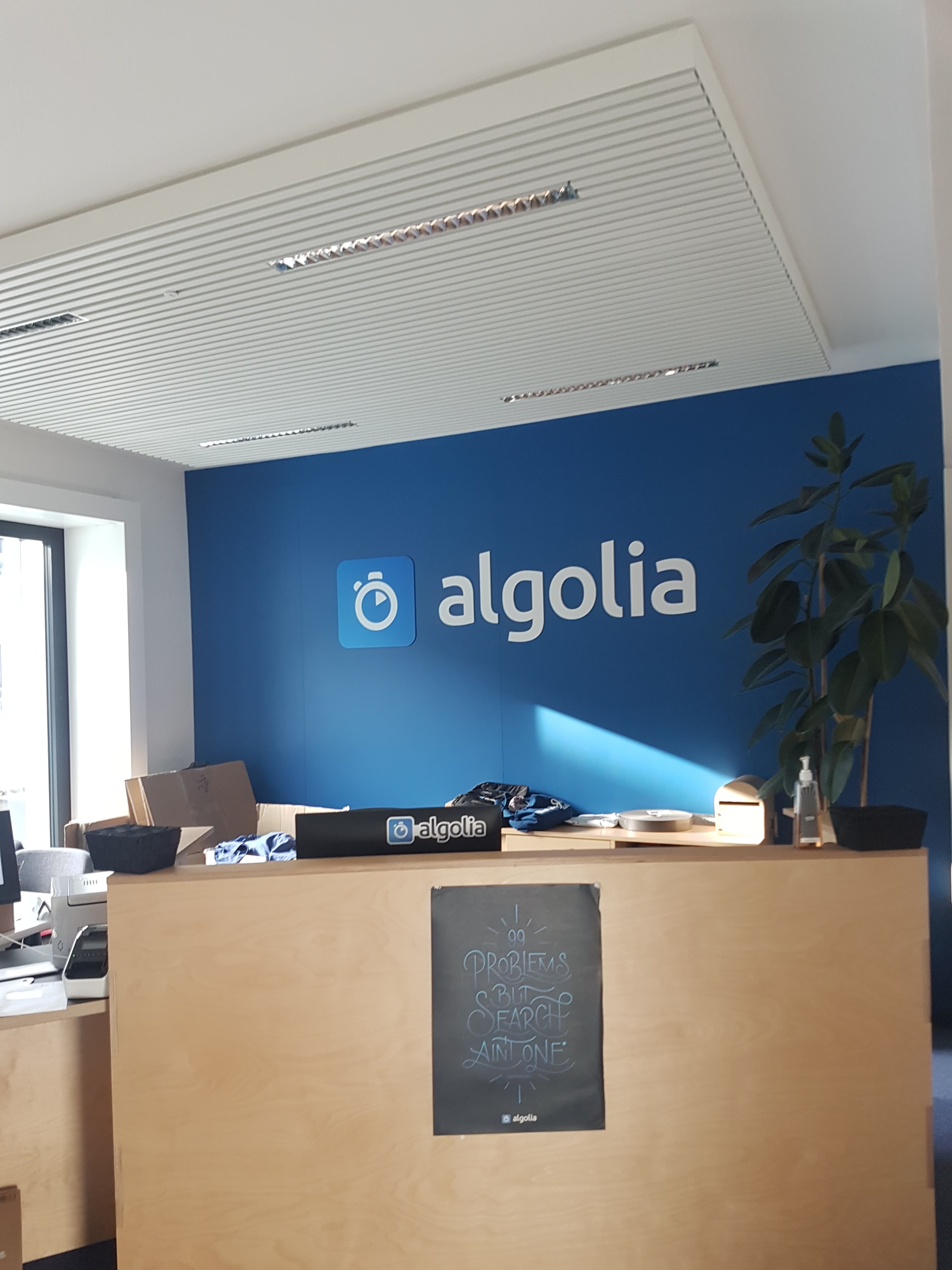 The talk lasted for about 45 minutes (Q&A included) in front of a full room of about 50 to 60 people and addressed questions covering anything from "should designers code?" to "how do you think developers perceive design?", I'll cover some interesting points that were brought up by some of the speakers, comment and mention my opinion on some of them. 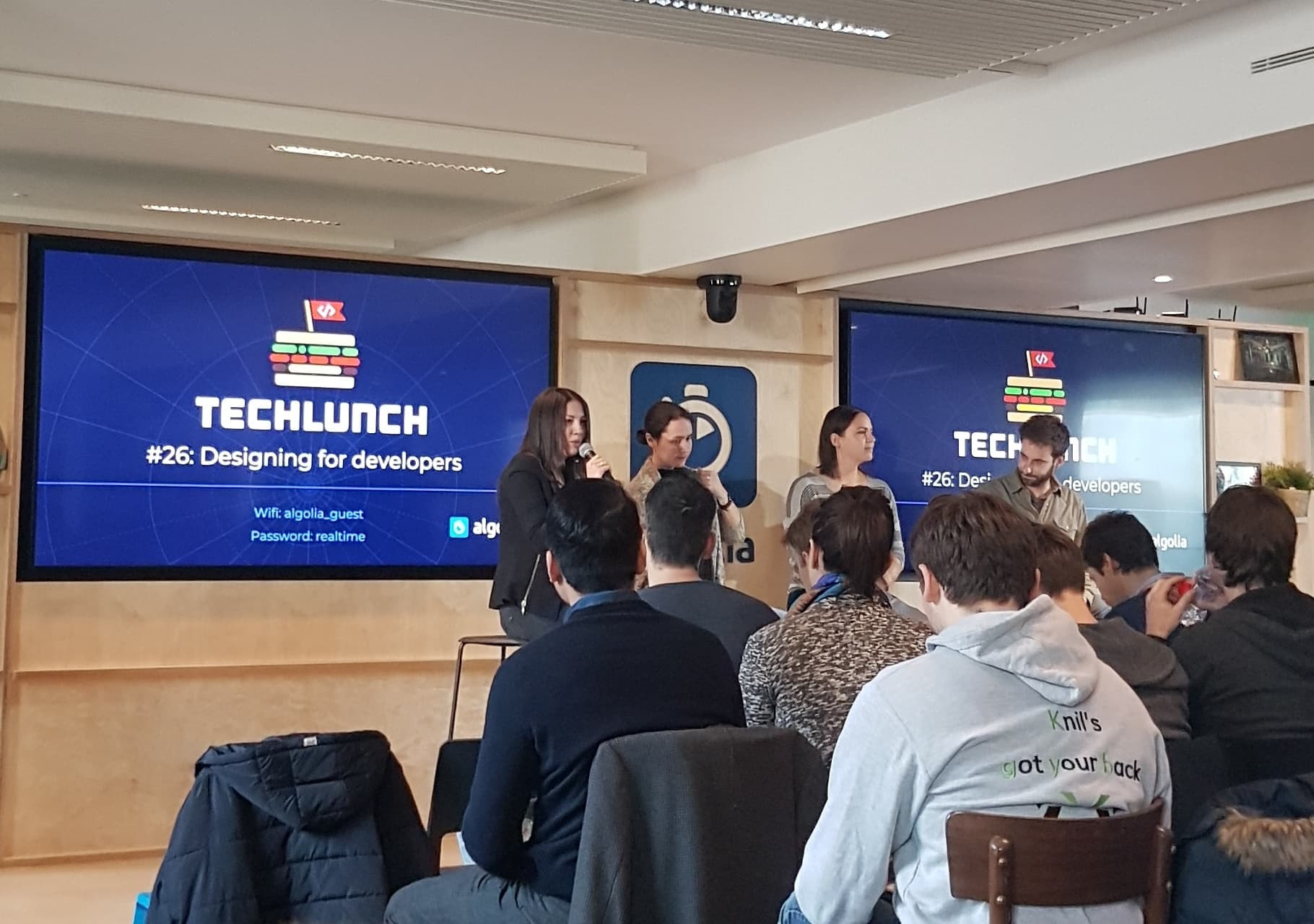 This panel was composed (from left to right) of Aurora Pleguezuelo, Lucia Kubinska, Vanessa Cahill and Romain Didry - all product designers.

At first, I thought the question wasn't meant to be taken as "should designers actively partake in technical discussions and implementations" (as some people seem to have taken it) but more as "is there benefit to knowing code and software development principles as a designer".

I instinctively thought "yes", or to be precise "yes, it could be beneficial for a designer to understand what devs deal with". Just as developers could learn a great deal by understanding important UX/UI principles and rules of design.
But the answers were mostly geared towards it not being necessary at all in most cases and most of the speakers having little to no coding experience in the past (some PHP and Wordpress templating here and there).

A question was then asked to the crowd: How many of you are designers?
Surprisingly, I could only see a few hands raised (probably around 4 out of at least 50 people). Pretty odd for a talk about designing for developers, but hey, it shows an interest by lots of devs to understand the problematics and challenges these designers face.

Differences between designing for developers & for end consumers

It was mentioned that devs are an interesting group to design for since they tend to be more critical of what has been designed as they know the behind the scenes. Avoiding this black box effect is intentional and seemed to be pushed by the speakers by building transparency and trust.

How do you think developers perceive design?

Unfortunately, each one of the speakers had experiences with devs that saw design as a bottleneck or as the end part of a project and not a necessity. Tho it seems like the mindsets have evolved and the vast majority of developers have a symbiotic relationship with designers in their team (especially in their current workplaces).

Devs obviously enjoy good design, especially in the world of dev tools where lots of them are poorly designed as mentionned by Romain Didry.

What is obvious to you but may not be to others?

Lucia Kubinska: pay attention to details as changes in typo or alignment for example may have a huge impact in the end, even tho they may seem small changes at first.

Vanessa Cahill: don't be afraid to ask questions to your collegues, it's pointless to avoid them to look smart as they'll see right through you. Ask a million questions if that helps you undertsand the project and concepts you're working on.
This was probably one of my favorite answers. It's obvious, sure, but it resonates in what devs do aswell. Especially in a field where knowledge sharing is vital.

Romain Didry: devs love to be involed in the process itself, understanding design choices and the reasoning behind them.

The closing remarks were overall about including and embracing designers in your teams and answering their questions. As a designer, embracing being uncomfortable and not knowing every technical subject your working on is absolutely normal and should prompt you to ask questions.

As you probably noted, a big theme of asking questions came up during the second half of this discussion and I believe it's what influenced me the most since then. I'm pushing myself to ask my designer collegues about their processes and choices on a daily basis to grasp their work on a lower level.

I really enjoyed this Tech Lunch at Algolia, pretty insightful and relaxed overall ! I really hope to participate in another one of them soon enough (and share some delicious food in the process).